ANNA MARIE MAGAGNA: The Art of Fashion: From Bendel's and Beyond 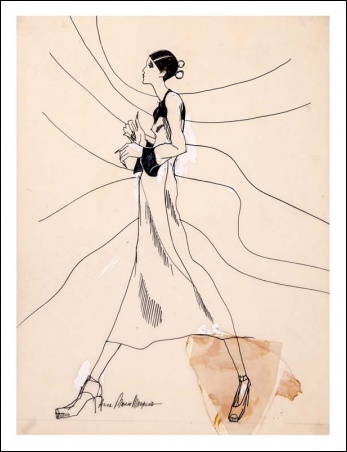 Madelyn Jordon fine art is pleased to present the first solo exhibition of original fashion illustrations by acclaimed new york artist, Anna Marie Magagna entitled Fashion as Art: The Bendel Years and Beyond from September 19 – November 2, 2013. an opening reception will be held Thursday, September 19, 2013 from 6-8pm. The artist will be present and the public is invited. Previews and private showings are by appointment only.

A highlight of the exhibition will be over 25 original fashion illustrations, created from late 1969 to the 1990’s. as a young artist Anna Marie Magagna was discovered by the american retail groundbreaker, Geraldine Stutz, then President of Henri Bendel in New York City. Stutz, selected Magagna to be the exclusive artist for Bendel’s from 1969 to the early 1970’s. this proved to be a revolutionary moment in fashion history-- when the “look” changed in Europe from elegant to edgy. Stutz, a fashion innovator, recognized the shift and with Magagna’s fashion illustrations in the new york times, abruptly changed the look of Bendel from cool, lovely, sophisticated and elegant to savvy, smart and edgy elegance.

Magagna’s drawings interpret fashion designs by Stephen Burrows, Sonia Rykiel, Jean Muir, Zandra Rhodes and others. for example, there are two illustrations of Burrow’s dress for Henri Bendel, See You in My Dreams and Beautifully Ready for Bed. It is evident that Magagna has a natural feel for the way dress fabric moves on the human body. These specific designs were published in the New York Times during the popularity of the famous Studio 54 Discoteque, which Burrows frequented. In the drawing See You in My Dreams one can see the impression of the leg in the foreground as the model walks towards us. you can feel her walking right off the paper into your space. the model is staring straight at us in both renderings of this dress to engage us, bringing us into her world while creating a desire to purchase this dress so we can be as elegant and hip as her personification.

Magagna’s fashion illustrations were recently exhibited in the exhibition at the Museum of the City of New York “Stephen Burrows: When Fashion Danced,” the first major examination of the early work of the designer.

Beyond fashion, the artist’s book illustrations include Pearl S. Buck’s “Christmas Miniature” and “Little Men and Little Women” by Grossett and Dunlap, among many others. previous exhibitions include the National Gallery of Art in Washington, D.C. and the New York Historical Society’s “Two Hundred Years of American Illustration.”

A versatile artist for more than 40 years, Anna Marie was academically trained at Marywood University in Fine Arts and Drama in Pennsylvania and continued her studies at the Art Students League and the School of Visual Arts in New York.

She served on the faculty of the Pratt Institute, Marist College, the Newark School of Fine and Industrial Art and Parsons School of Design and for the past 10 years has become an international portrait artist.