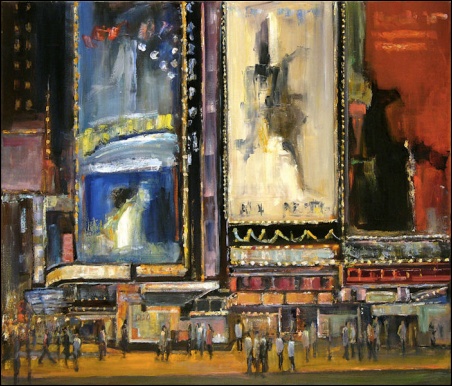 Madelyn Jordon Fine Art is pleased to present a fifth solo exhibition of new works by New York painter Lawrence Kelsey entitled Lawrence Kelsey: “Night Moves” from April 8 – May 21, 2011. An opening reception will be held Fri, April 8, 2011 from 6-8PM. The artist will be present and the public is invited. Previews and private showings are by appointment only.

The exhibition of oil paintings and works on paper introduces a new series of works by the artist, whose continuing focus on New York City provides for fresh interpretations of urbanity. Kelsey’s new paintings largely depict New York after the sun goes down. Day is done, and a vibrant nightlife begins, transforming buildings, architecture and streets into a glittering spectacle, a cornucopia of visual resplendence. Iconic landmarks bathed in shadow, luminous New York skylines, electrifying crowds, and intimate street scenes come to life in Kelsey’s new works. As the artist records new visions of his favorite city, he pushes the envelope with a new, high-key palette….a virtuoso repertoire of colors, ranging from subtly, soft pastels to mesmerizing turquoise, purple and pinks. Equally striking is the artist’s distillation of architecture down to pure geometry, reminiscent of Cubism without its planar treatment, clearly evident in his street scenes - 42nd, Broadway, and Canal. Kelsey canvases New York, recording his favorites: the Chrysler Building draped with lights, Times Square aglow and bustling, the Empire State Building with Midtown’s golden radiance, and night skies - running the color gamut - against buildings of the skyline. In this show he has expanded his repertoire of views with his recent move to the borough of Queens. Drama is created in each work through color, light, and proximity, capturing the pulse that is New York.

New York City, especially Manhattan, has been the focus of Kelsey’s artistic oeuvre for over twenty years. A classically trained artist, Kelsey’s recent works range from the abstract to the representational, from the poetic and emotional to the straightforward and unsentimental. Responding to both psychological and geographical elements of the city, the artist conveys the effect of being in certain places, and reveals the poetry and rhythm of urban life, reflected in its streets, bridges, and waterways. Here, New York’s architectural structures - the familiar and iconic - act as structure both for the paintings and our experience with them. The artist entices us with a New York of his own invention and invites us to experience it for ourselves.

Born in Ohio, Kelsey moved to New York with his family at the age of three, and was raised in New Rochelle. He attended The Art Students League in Manhattan, studying with Vaclav Vytlacil and Beverly Hale. His work is included in numerous private and public collections, including The New York Historical Society, Merrill Lynch, Pfizer, and Black Rock.

Gallery Statement
Founded in 1994, Madelyn Jordon Fine Art specializes in 20th century and contemporary art in all media. The gallery, located in Scarsdale, NY, in lower Westchester County, seeks to be a source for collectors (both experienced and new to the field) for quality contemporary works of art. The gallery showcases the work of nationally prominent artists as well as those emerging. An eclectic sensibility is seen in the presentation of exhibitions in a wide variety of media, including painting, sculpture, photography, printmaking and glass.
Madelyn Jordon Fine Art
14 Chase Road
Scarsdale, NY 10583
Tel: (914) 723-8738
E-mail: info@madelynjordonfineart.com
Tues - Sat 10:30 - 5:30PM