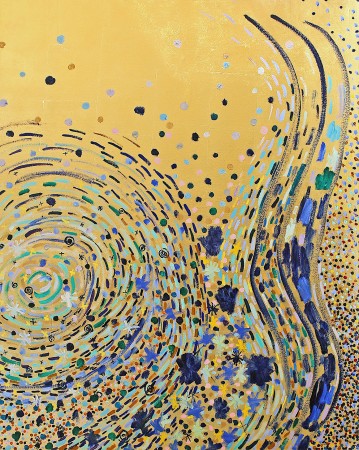 Madelyn Jordon Fine Art is pleased to present THE ARCANA SERIES: INTERPRETATIONS OF TAROT, a solo exhibition of paintings by New York City artist, MICHELLE SAKHAI. This is Sakhai’s second solo exhibition with the gallery and will be on view from September 6 - October 19, 2019, with an opening reception on Friday, September 6th from 6:00 - 8:00 p.m. The public is welcome to attend and meet the artist.

Michelle Sakhai’s new series of paintings is the culmination of a year-long project, which presents the artist's interpretation of select Major Arcana Tarot cards.  Seeking to honor the sacred interpretation of the cards, Sakhai explains, "Major Arcana Tarot cards represent the life lessons, karmic influences and the big archetypal themes that influence our life and soul’s journey to enlightenment. Their meanings are deep and complex. Tarot readings are a powerful form of divination that use a deck of cards to help you find answers to your most important questions.”  Sakhai shares her motivation for the series.  "We live in a modern era and the cards could benefit from an updated rendition. My intention behind re-creating them is to both connect us back to the source and the higher power, bringing healing to those who feel a connection with Tarot."

Sakhai encountered Tarot in pursuit of her spiritual path, a fundamental part of her art. With an interest in the teachings of Transformative Art, Sakhai’s abstract paintings focus on light and energy, with each spontaneous stroke serving as a vehicle for healing and channeling peace.

Her signature style, a mix of oil paint in vivid colors accented with silver and gold leaf, often raised off the surface, provides the work an overall sense of delicate richness, depth, and shimmer. The emboldened brushstrokes, imbued with intention and confidence, coalesce across the canvas in a harmony of color and form, reaching to the edge with élan and sophistication. Sakhai consistently demonstrates her abilities as a colorist, skillfully mixing her refined palette into an infinite range of rich hues. The use of metallic leaf on the canvases distills a subtly reflective surface, changing the look of the composition depending on light source.

A beautiful demonstration of movement and light can be observed in the painting Wheel of Fortune X. Abstractly depicting the iconic “wheel” with concentric swirls of blue and white oil paint over a striking gold leaf background, the artwork seems to pulsate across the canvas. Rainbow hued dots are arranged in a patterned formation and interspersed throughout the work creating a vibrant, active surface. The joyfulness that the work elicits aptly resonates with its congruent Tarot card meaning: good luck and good fortune is soon to return.

Additionally, Michelle Sakhai is a Primordial Sound Meditation instructor through the Chopra Center, as well as a certified Reiki Master. She teaches Transformative Art at the Harlem Hospital through the Art Works Foundation in New York City, where she currently resides while continuing to travel the world.